For Ashes of Creation unless a system is specifically one of the PvP Themes, then it is safe to assume that it is one of the PvE themes. Ashes of Creation is a theme box game where the PvE theme is what builds the world, and the PvP theme is what destroys it. Neither theme is more important in world shaping they each have their own specific contributions to the world development.

Most of the PvE Themes have already been detailed out in other places on Ashes 101: Nodes, Artisan System, Caravans, etc.; however, there are some remaining topics that we have not discussed in detail yet.

For a large portion of MMORPGs the questing system in a game has to be top notch or they find the game unplayable. Players also do not want to be bogged down with mindless repetitive dailies that turn the fun into a chore or a wheel that must be run on every day or you fall behind in progression. Luckily, Ashes of Creation is using neither of these things in their questing system.

There will be Story Arcs in Ashes of Creation which put characters on a quest line of either Personal, Cultural, Regional, or other types of development. The Quests are part of the overall storytelling narrative. Storyline quests have multiple stages, and unlike many other MMORPGs it is possible to fail in your storyline arcs. There will also be Epic and Legendary quests which are also part of the narrative of the game.

Tasks in Ashes of Creation are what you would call dailies in other MMORPGs; however, tasks are not part of your personal character development. This is not a situation where if you do not log in daily you will fall behind on your personal development, instead tasks are related to the world building theme of the game, specifically your local Node development.

The key here is Intrepid is making sure to make these things that can be done as a source of engagement for solo players, not be things that must be done to stay relevant. There is the opportunity to do node-based objectives, but they do not become a requirement. Of course, those players who do make a daily commitment will reap the benefits of having a more prosperous Node.

There are going to be events that occur in the world of Verra. Sometimes this will be a rampaging pack of raptors that attack your town, it could be a horde of Zombies, it could even be a Dragon you have disturbed with your industrial pursuits and the development of your Node. Regardless of what causes the event, it will be an event you must address or it will have lasting effect on your Node. While these events do not have the ability to destroy a Node, they can certainly disrupt it, killing NPCs and disabling services until they are built back up.

During events it is possible that players will expend Monster Coins to take control of the monsters. This system has been quite controversial from a player perspective, given a monster under the control of a human player will without a doubt be able to inflict more damage to an enemy node Nodes when compared to abilities of a mob AI, Intrepid Studios has said they will structure this system to prevent people gaming the system and inflicting a disproportionate amount of damage through this system.

Ashes of Creation is using a combination of Open World and Instanced Dungeons and Raids. Approximately 80% of the dungeons will be open world and will be able to facilitate multiple groups within the same dungeon. The other 20% of dungeons and raids are going to be instanced, and they are designed to cater to solo or group questlines (story arcs).

There is not going to be dungeon scaling, so there will be dungeons with certain level recommendations. As these are open world dungeons, they are not requirements, but if you are level 5 and you wander into a level 50 dungeon you can connect the dots to what is going to happen very quickly to your character.

For Dungeon and Raid party sizes, as the default party size is 8, some content will be designed around 8 person parties, as well as multi-party having content tailor for the 40, 16, and 8-member party sizes. There has been some discussion around if you will ever need 5 tanks in a 40-man dungeon, but people need to remember the only threat in dungeons is not just the PvE content, its other players as well. Finally, yes, the PvP flagging system will be available in dungeons, which means you will be contesting not only the dungeon but also the other players.

The strategy concerning Dungeon and Raid bosses will be difficult to learn and metagame. Bosses will change their abilities and attack patterns based on the development of the Nodes around the Dungeon/Raid. If the world has more Metropolis, the boss will gain more abilities, and depending on the Node Types these Metropolis represent, the boss may gain, lose, or change abilities. This will also change the loot tables for the bosses. 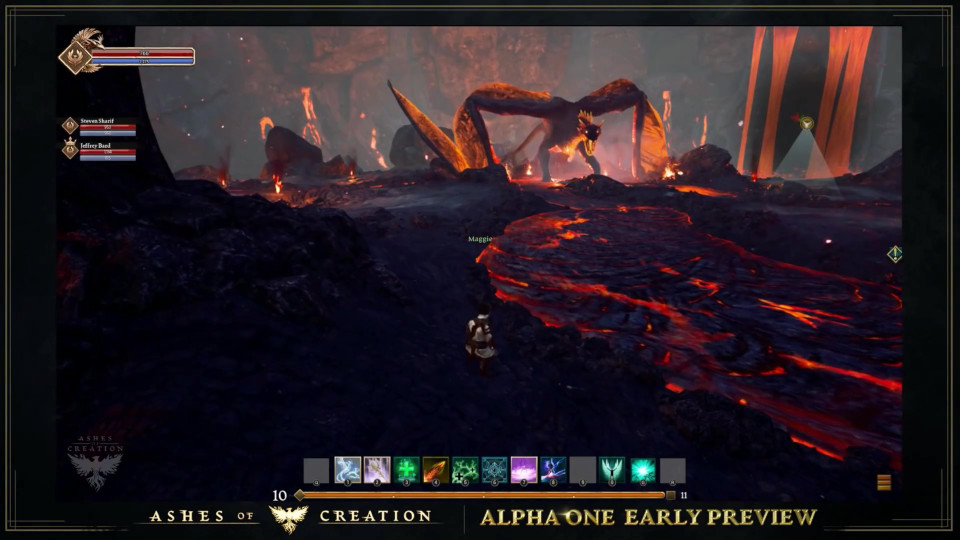 In addition to Dungeon and Raid Bosses, Ashes of Creation will offer a range of Regional Bosses and Legendary World Bosses. Intrepid plans to have between 12 and 15 Raid Bosses in the world, and these Legendary World Bosses will be the only creatures that drop Legendary items. There is not a fixed count of Regional Bosses as both World and Regional bosses spawn under specific circumstance and in response to different developments in the world.

The determining if your group gets the loot from a boss or monster is determined by a tag system and a total damage system.

If your group is the group that gets the loot from the boss, then the distribution of the loot will be determined by your specific party’s loot rules. The party leader can pick from several different loot distribution options: