Ashes 101 Ashes of Creation The World of Verra Overview

The World of Verra

This Page available in

From a purely mechanical perspective the world of Verra is 480 km² with an additional 100 km² of Underrealm. Right now, there is no definitive answer of how much of the 480 km² is land and how much is water. There has been speculation on the part of several community members, myself included, as to how big the world might be in terms of travel time; however, Steven stopped giving answers when we were theory crafting. I take that as a sign we were getting close in our theory crafting.

So to answer the question: How big will the world feel? The world is going to feel big because it is big. Count on several hours to travel from the very North to very South and several more if you are going East to West.

One key thing to consider during discussions of map size, is that the size of the map is one thing, but the travel speed is really what you need to know. The world could be 480 km² but if you traveled at 10km a minute, then the world would feel much smaller than if you traveled at 1km a minute. The only real travel time mechanic we know is that during APOC sprinting was at 6.4 m/s, so with that number in mind it is going to take a long time to traverse the world.

Verra is divided into five static geographical regions. Right now, the map we have does not show these regions, but we know the regions are fixed and static. Their size and location are not influenced by player actions and they cannot be moved, bent, twisted, or destroyed. This is not to say the people inside these regions are not influenced by player actions. The seat of power in each region is the regional Castle and the castle is ruled by a player character (PC) Monarch.

The Monarch is the leader of the guild in control of the castle at the end of each four-week siege cycle. Whether you like it or not, you will be living in a region ruled by a PC Monarch. The Monarch has some governmental powers including the ability to levy taxes on all Nodes in the region. Most of this tax money goes to the Castle and Regional Development, but a small portion of it can be removed by the Monarch and devoted to any endeavors the Monarch chooses.

All of the castles are going to have proper names. So far we know of a Dünzenkell castle named Milnar, and an Aelan castle named Korgan.

What came first, the chicken or the egg? A timeless riddle that applies to Ashes of Creation in regards to the Nodes and Zone of Influence relationship. For educational purposes I’ve chosen to present Zones of Influence first.

A Zone of Influence (ZOI) is a geographical boundary tied to a Node, or more accurately tied to a spot where a Node may develop. At launch no Nodes will be developed, they all begin at level zero. When the game begins there will be 103 ZOI in the world. There is nowhere you can go on the map that is not governed by a ZOI, 100% of the land, water, and Underrealm is covered by a Zone of Influence.

While inside a particular Zone of Influence, anything you do that accumulates Experience Points (XP) for your character also generates XP towards the development of the Node. Inside each ZOI are two or three different locations where a Node may spawn if all the proper conditions are met. Once a Node spawns inside of a ZOI those other locations become inert and can not spawn a Node.

Unlike Castle Regions, which are fixed and static, Zones of Influence are fluid, allowing them the move, bend, twist, turn, expand, and push against each other. As ZOI are tied to Nodes, most of the details regarding their development is going to be detailed in the various Node sections; however, I wanted to present ZOI before I presented Nodes so you could learn one concept before learning the next one. 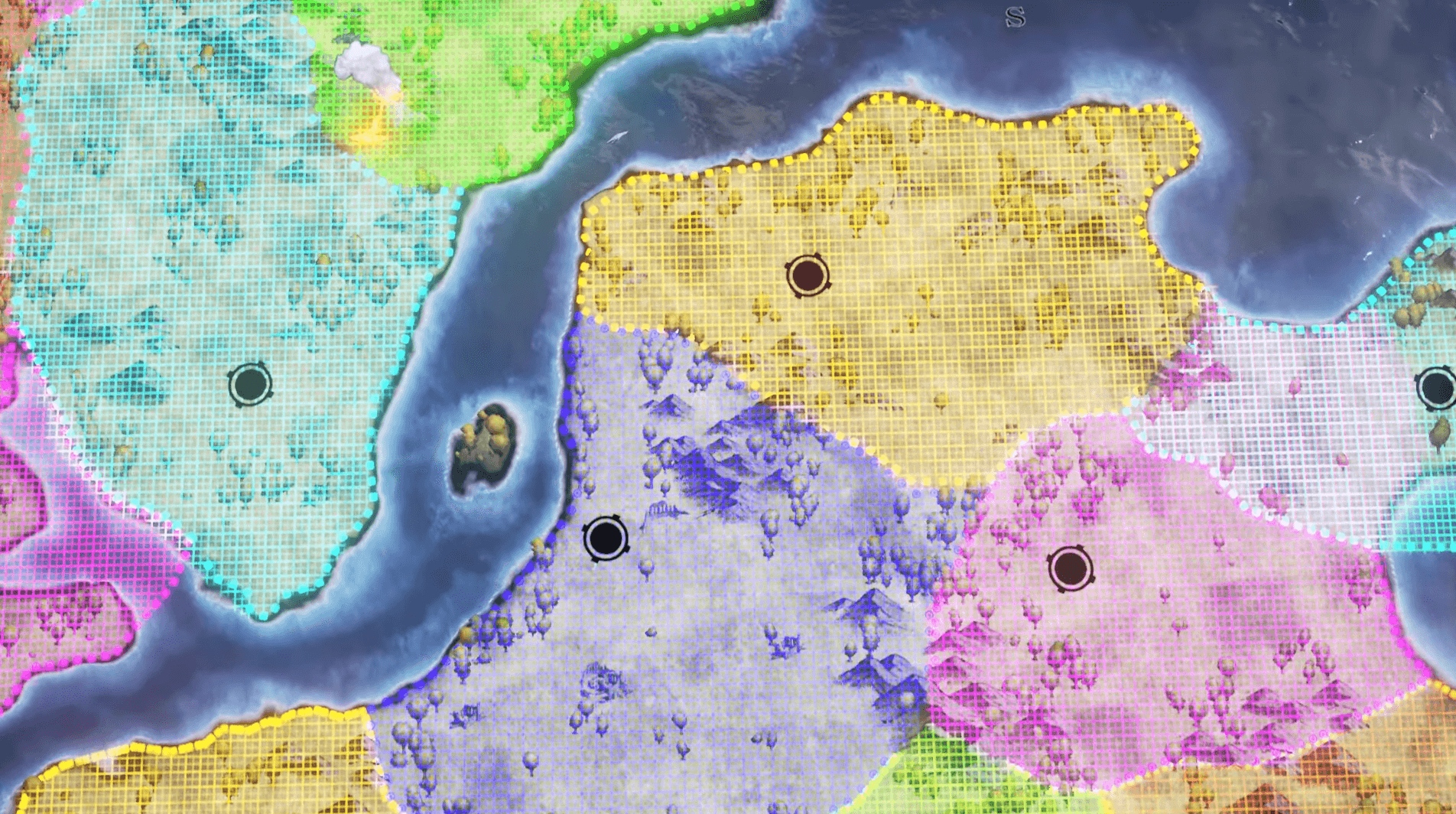 The Nodes System in Ashes of Creation is so complex that I have had to break it down into several different videos. So that the new people understand what a Node is we are going to use the term “center of civilization.” Unfortunately, it would be inappropriate to use terms like Village, City, or Town because these terms are specific states of Node development.

In Verra, there are a total of 103 Nodes in the Node system, as well as 15 Special Nodes that function outside of the Node System that are tied to the Castles. As a special note, I am including these Nodes in with “Nodes” for the moment, however, it is highly probable Steven will turn these into named locations.

When the players first arrive in Verra they will find only the starter areas developed, the rest of the world is a blank slate. As the players move out into the world and start earning XP in those various ZOI the world is barren. Very quickly after arriving in an area, a Stage 1 node will appear and then the world will begin to take shape.

To have a world with absolutely no starting areas would be impossible for an MMORPG. In order to facilitate the launch and early hours of the game, the world has eight starter camps, two attached to each of the Divine Gates.

Much earlier in development the four divine gates were going to be tied to the races; however, a design change has occurred and players are going to be able to start at any Divine Gate they wish. This also includes the Tulnar. They will not be starting in the Underrealm, instead they will be joining the other 4 races at the Divine Gates.

As of 26 August 2020, we have some new information on the starting areas.

Both the four core races (Dwarves, Elves, Humans, Orcs) as well as the Tulnar have the option of starting either at the Divine Gates or in the Underrealm. Just outside of these divine gates are starting base camps that will resemble what players are used to in MMORPGs. There will be limited services and things to do here to help the players get their feet under them. After that, the players will move around the world and work to develop different Nodes. We do not have confirmation about what services will be available in the Underrealm, but logic dictates it will be the same as at the Divine Gates.

Just outside of these divine gates are starting base camps that will resemble what players are used to in MMORPGs. There will be limited services and things to do here to help the players get their feet under them. After that, the players will move around the world and work to develop different Nodes.

Finally, a lot of people have asked about Sanctus. Sanctus is where the residents of Verra sought sanctuary back when the corruption came. The Gods opened divine gateways for the Verrans to escape. The 4 core races (Humans, Dwarves, Elves, and Orcs) were able to move a number of their citizens through the Divine Gates to Sanctus before the portals had to be closed. I will be adding a lore background for Ashes 101 in the coming days.

While not a world division, one continually fallacy of thinking kept coming up in discussions with viewers during my Twitch Q&A sessions. Players are locked into this mentality that Ashes of Creation is going to be like every other MMORPG they have played, where there are options of fast travel which make a large world feel small. This mindset is going to be a detriment to players if they do clear their perceptions and realize travel time is going to matter. The World of Verra is huge; deliberately designed to give meaning to distance and travel time.

One key thing to consider during discussions of map size, is that the size of the map is one thing, but the travel speed is really what you need to know. The world could be 480 km² but if you traveled at 10km a minute, then the world would feel much smaller than if you traveled at 1km a minute. The only real travel time mechanic we know is that during APOC sprinting was at 6.4 m/s, so with that number in mind it is going to take a long time to traverse the world.

To articulate this perspective and to give weight to the distance of the world I put this video together so people understand how travel time and distance is going to be different in Ashes of Creation.